Rob was born in Temuco, Chile to missionary parents, but was raised in Nyack, NY.  He earned his BS Ed. in Exercise & Sport Science from the University of Georgia and began his physical therapy career as a licensed PT Assistant in 1997.  He later returned to PT school, graduating from Neumann University in Aston, PA in 2002.

Early in his career, Rob worked in nursing homes and hospitals, including three years on the NeuroSciences Unit at Duke University Medical Center.  In 2006 he became a Certified Vestibular Rehabilitation Specialist and began focusing the majority of his care on patients with dizziness, vertigo, and balance problems.  He spent nine seasons as the Concussion Specialist for the Carolina Hurricanes hockey team.  Rob also works with neurological patients who are dealing with Multiple Sclerosis, Parkinson’s Disease, and stroke.

Rob enjoys spending his free time outdoors with his wife and three children.  He is a fervent Pittsburgh Steelers fan and spends all fall and winter cheering vigorously for them. 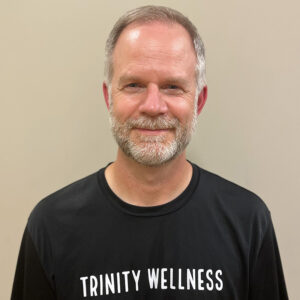 Our three-fold commitment to you begins with our highly qualified physical therapy staff, including ABPTS Board Certified Specialists.  Our physical therapy services include Dry Needling, Functional Movement Screen (FMS), Sports Physical Therapy, Postural Restoration (PRI), Sound Assisted Soft Tissue Mobilization (SASTM), Vestibular Rehab and Other PT Services. Our licensed physical therapists provide one-on-one sessions lasting 45-minutes. They are committed to maintaining a warm and loving atmosphere and designing individualized treatment plans that meet your unique needs and challenges.  We’ll empower you with education, home exercise programs, and options for rehab-based fitness to transition you back to an active lifestyle that will keep you healthy!

A Hands-On Approach to Physical Therapy

If you or a loved one is suffering from a painful physical condition, let Trinity Wellness Center assist you in making tomorrow a better, healthier day.  We look forward to meeting you and helping you achieve your goals!

Get Help Today!
Previous
Next